New Home Away From Home, A Refugee Family's First Ramadan In Sacramento

Dozens of Middle Eastern refugees and their families relocated to Sacramento to start a new life away from the killings and bloodshed of the wars in that region. According to the Refugee Processing Center, almost 300 Syrian refugees have been resettled in California since October, 2015. About 50 of the 300 have made Sacramento their new home.

For some of those families, it’s their first time observing Ramadan outside an Arab or Muslim country.

Syrian refugee Ayman Alkhudairi says his first Ramadan is not much different in Sacramento than how the Holy Month was observed back home. “We cook, get together. We go to the mosque. We pray. We’re comfortable. No one bothers us,” he recalls, speaking in Arabic.

For the 29 or 30 days of Ramadan, Muslims completely abstain from eating or drinking anything, including water from sun up till sundown.

The family’s sense of safety is the biggest difference between this year and last year.

Alkhudairi and his wife Sanaa Al-Awad arrived to Sacramento in November 2015 with their six children. Their oldest is 17 years old and youngest is two and a half. They left their home in Homs, Syria and lived in a village outside of the city to escape the war. Then, they illegally crossed the border into Jordan in 2012.

None of the Alkhudairi family members speak English yet. Their interviews for this story were conducted in Arabic.

“We had to crawl through an open metal fence and met our friend across the border,” says Alkhudairi.

The family eventually was selected to come to the United States on a Special Immigrant Visa. The application required the family to list a reference and sponsor here in the U.S. They chose a Syrian friend who’d been resettled to Sacramento a year before. And that’s how they ended up here.

After they escaped the war in Syria, the family didn’t know what would happen next. Settling in Sacramento has made them feel safe and comfortable. Al-Awad even says her first Ramadan here reminds her of how Ramadan used to be before the war in Syria.

“Here I found the same habits like in Syria,” says Al-Awad as she prepares “iftar” in the kitchen.

At sunset during the month of Ramadan, families gather to break fast with a meal called iftar, or “breakfast.”

“It’s about the nice atmosphere. It gathers the family around for iftar in the evening. There’s more love, there’s honesty, there’s safety,” says Al-Awad.

After iftar, there’s a special two-hour prayer called “taraweeh.” The word taraweeh comes from the Arabic word for “relief” or “revival.”

The Alkhudairi family also goes to the mosque after iftar then socializes outside after taraweeh prayer. Just like they used to in Syria. 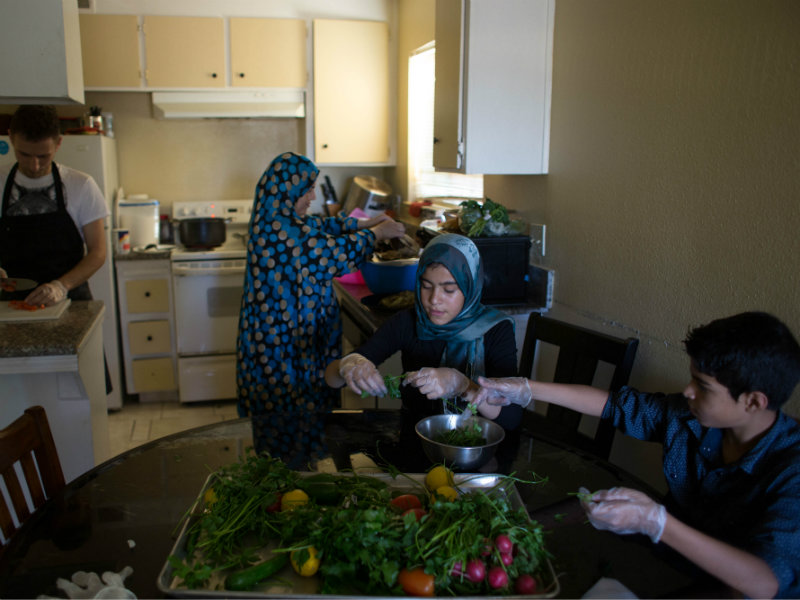 “Nothing changed because we make our own Ramadan atmosphere. It doesn’t depend on what others around you are doing. You do it yourself,” he says.

Turki Alkhudairi is the family’s oldest son. He says of course one’s own country is best, but life is nice here, too. Turki enjoys Ramadan every year, he says it’s a relaxing month and he feels energized during the day. What’s helpful during his fasting here is that Sacramento weather is similar to what he’s used to in Syria. It’s not a lot hotter he says.

But there are a few things he misses about Ramadan in the Middle East.

“I miss my friends and family and how all of us got together weekly for iftars,” he says. “After iftar we used to go out and hang out but here we go to the mosque for a couple of hours then come home.”

Turki also misses eating “atayef,” a pancake-like dessert filled with cheese or walnuts. It’s baked or fried then soaked in a light sugary syrup. This is a traditional Ramadan dessert sold at bakeries throughout Middle Eastern countries. Some local bakeries take orders during Ramadan.

“I had it once at the mosque here but we don’t know how to make it at home so we can’t make it,” says Turki.

Even though their neighbors don’t observe Ramadan, Al-Awad doesn’t feel people treat her and her family as outsiders.

In fact, during this interview, about an hour before iftar, the stove stopped working while Al-Awad was in the middle of cooking “kabseh,” a dish of rice and chicken with special spices. Al-Awad simply carried the pot out of the kitchen, down the stairs to her Latino neighbor’s apartment to finish cooking in time. 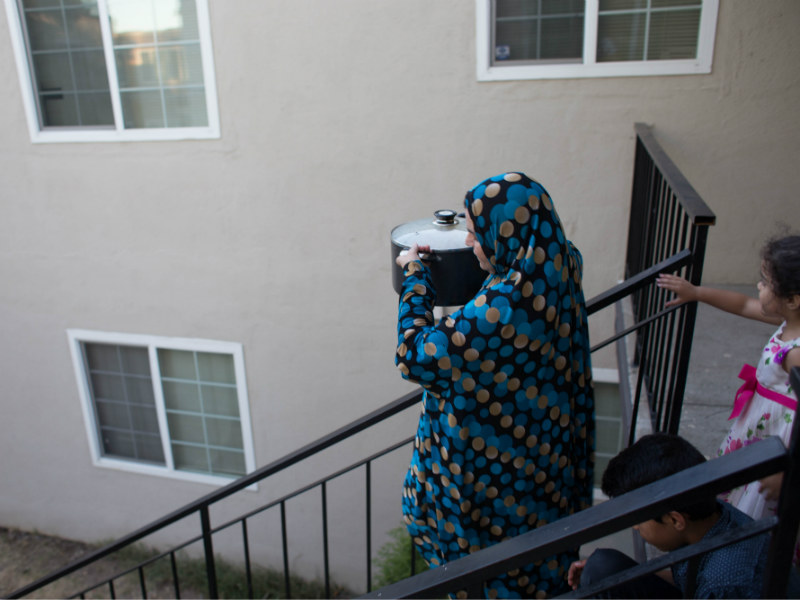 Because Al-Awad doesn’t speak English, her only way of communicating with her neighbors is by hand gestures. She raises the pot up and nods while smiling at her neighbor.

“Oh! You want to cook it?” asks the neighbor in English. “Yeah, go ahead, come in,” she says as she signals for Al-Awad to walk into the apartment.

“This is normal,” says Al-Awad in Arabic. “They always help us and we help each other.”

Ayman Alkhudairi describes Americans as being nice and humble. Before arriving in Sacramento, Alkhudairi heard life would be hard but he believed it would be good.

“Coming here made a difference. The government helps and even strangers are helpful at times,” he says.

Family members say language is still a barrier, but they are learning English by mingling with their English-speaking neighbors.

“We use signs and the kids know a few words here and there,” Alkhuadairi  says. “But till now it’s a little difficult...we’re slowly learning and with signing, things go smoothly.”

But he also says it’s easy to find an interpreter when needed, especially when dealing with government agencies.

He mentions a recent phone call with a bank representative as an example.

“He kept talking and I understood from the first few words that he’s from the bank,” says Alkhudairi. “Then I said, ‘No English, I am Arabic.’ So he understood and got an interpreter.”

Ramadan, known as the month of giving, is observed during the 9th lunar calendar month every year by Muslims around the world.

In addition to observing religious traditions, in Muslim countries, homes and streets are decked with colorful lights and lanterns light up the streets. Stores, shops, restaurants and malls are open till the early morning hours and it’s common for people to stay out late during this time.

The Alkhudairis last saw Ramadan street decorations during their time in Jordan. Here in Sacramento, there’s nothing like that. Ayman Alkhudairi says his family has made its own Ramadan atmosphere this year by observing their first Ramadan in Sacramento.

The family of eight is adapting to a new life in their new home.

“It’s hard to go back to Syria. There are too many problems it’s not just one. People have no mercy there and we’re away from the problems now,” says Alkhudairi.

His main focus now is learning the English language and keeping the kids in school. Turki plans to finish college and continue on to medical school to become a doctor.

“I’m thankful that the American government helped us and thankful to the American people for being humble,” says Alkhudairi. “They’re willing to help with anything they can. We’re very comfortable now.”

The Alkhudairis and other Muslims will observe “Eid” on July 6, the holiday that marks the end of Ramadan. Over 6,000 people are expected to attend Eid prayer and celebrations in Sacramento this year.