If you’re driving on I-80 through Roseville, CA., it’s hard to miss -- a bright red, abstract sculpture that stands out against the tall green trees. But what is it?

Because of the sculpture’s color and location in  Roseville, there are some misconceptions about what is commonly known as “The Rose Sculpture.”

Mona Kanawi lives in Lincoln and drives by it weekly.

“I heard something about how it’s supposed to be a rose when you look at it straight down, but in all honesty I don’t know,” says Kanawi.

He says, “If it’s not a rose, then my whole life living in Roseville has been a lie.”

Sorry, Dominic and Mona, the sculpture has nothing to do with a rose.

Sculptor Aris Demetrios designed the 80-foot-tall steel sculpture in the late 1980s and called it “Cosmos.” He says it’s a salute to the cosmos, defined by Google as “the universe seen as a well-ordered whole.”

“It’s an apt example of a sculpture trying to say something about the complex universe we live in,” says Demetrios. Cosmos was dedicated to the people of Roseville in 1990 by developer Angelo Tsakopoulos and has been the centerpiece of Sculpture Park ever since.

Demetrios says he wanted to create a park to encourage “youngsters” to make art on their own and have a place to display it.

Between 1998 and 2004, the City of Roseville hosted student art contests. Roseville elementary students created sculptures that were cast into bronze for the contest and each year the winners had their art displayed at the base of the Cosmos sculpture.

“The kids got to express their talent in this particular contest,” says Demetrios.

But, according to the city, starting in 2005, thieves began stealing the bronze sculptures. Up to 33 of them were taken from the park.

Cosmos was too large to steal and that’s why it was vandalized, says Demetrios.

“The only thing they could do to the big sculpture is put graffiti on it,” says Demetrios. “But the little [sculptures] were really cherished by the people who made them, and their families.” The remaining plaques were removed from the park in 2011 and are now housed at Maidu Museum.

In the end, Demetrios is happy with what he created.

“Cosmos is a well-conceived, well-made sculpture in the right place,” he says. “When I was working with the children it was a tremendously successful urban project.”

And, the idea of Cosmos being mistaken for a rose doesn’t bother the sculptor.

“The beauty in that is people can interpret it however they want,” he says. “As long as people see the beauty of it, I’m fine with that.” 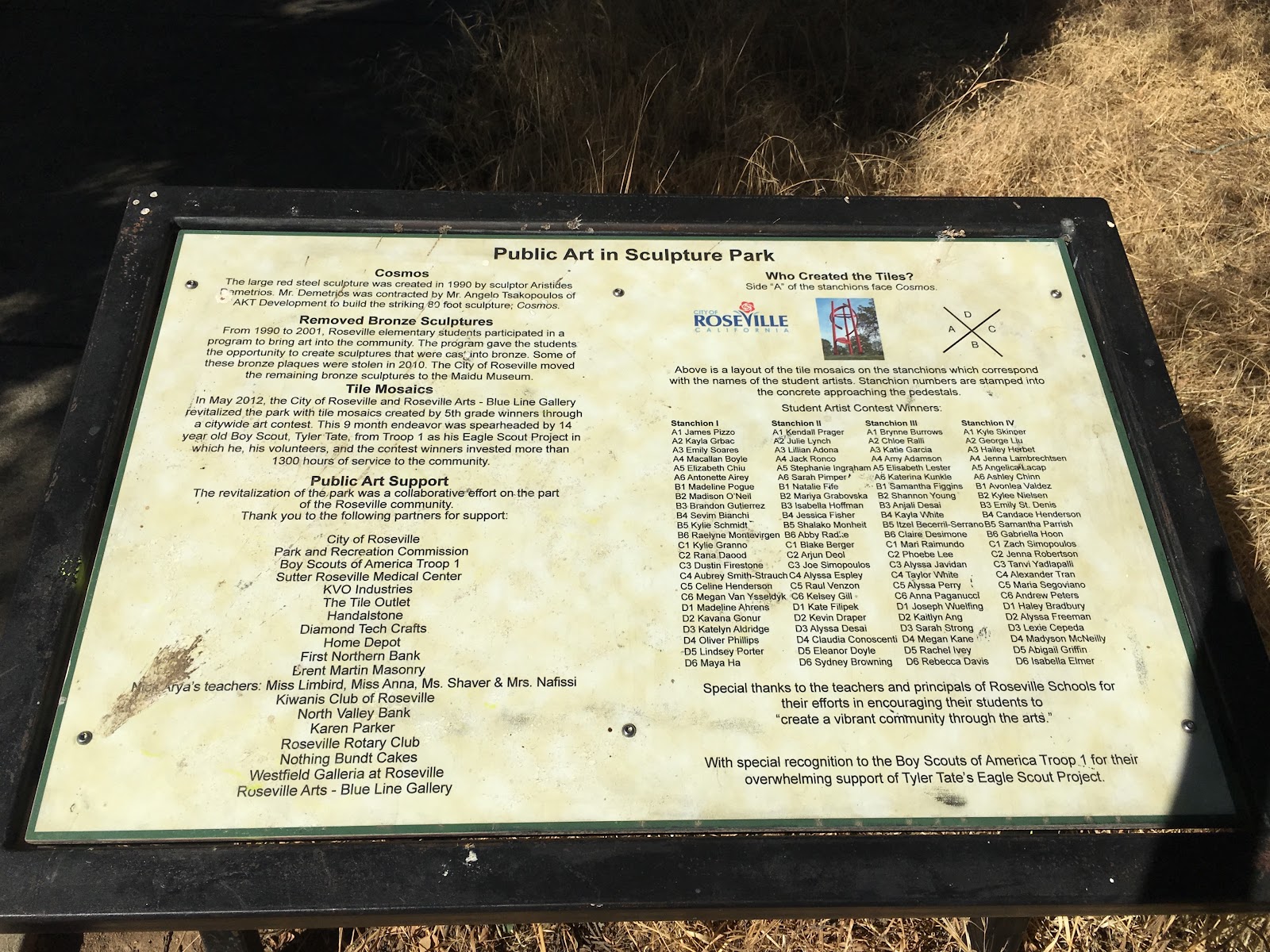